A chronological presentation of the case

On Friday February 1, 2013, a double robbery took place at the local branch of the Agricultural Bank of Greece and the Hellenic Post office in Velven
to, Kozani, Greece. Following a mass police mobilization in the whole area, one person was detained in the surroundings of Ptolemaida, and three more were arrested later on during a police chase operation.

From the outset of their arrest the four detainees – G. Mihailidis, D. Politis, N. Romanos and A.D Βourzoukos – declared themselves to be anarchists. The comrades were forced to stop a passing vehicle in their attempt to escape during the police chase. They avoided armed confrontation with their pursuers so as not to jeopardise the driver’s life. END_OF_DOCUMENT_TOKEN_TO_BE_REPLACED 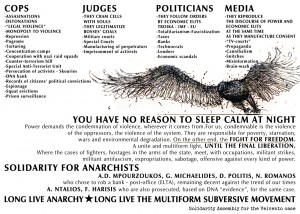 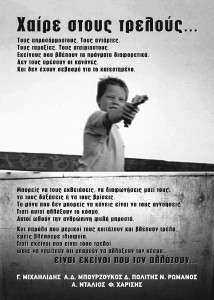